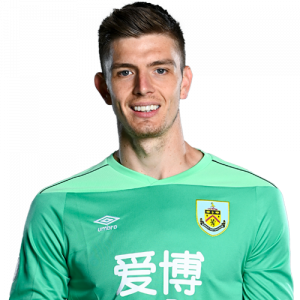 Nicholas David Pope (born 19 April 1992) is an English professional footballer who plays as a goalkeeper for Premier League club Burnley and the England national team.

Pope started his career in Ipswich Town’s youth teams and after being released aged 16, he joined Bury Town. He signed for League One club Charlton Athletic in May 2011, before having loan spells with Harrow Borough, Welling United, Cambridge United, Aldershot Town, York City, and Bury. Pope joined Burnley of the Premier League in July 2016.

On 19 July 2016, Pope joined newly promoted Premier League club Burnley on a three-year contract for an undisclosed fee. Pope made his Premier League debut on 10 September 2017, replacing the injured Tom Heaton in the first half of a 1–0 home win over Crystal Palace. He made his first Premier League start the following week, on 16 September 2017, in a 1–1 draw against Liverpool away from home.[32] On 9 October, Pope signed a new contract to keep him at Burnley until 2020. He suffered a dislocated shoulder on 26 July 2018 after colliding with Sam Cosgrove during Burnley’s 1–1 draw away to Aberdeen in the UEFA Europa League second qualifying round first leg.

In May 2019, Pope signed a new contract with Burnley, initially running until 2023. He had a prolific 2019–20 season, as he featured in every minute of Burnley’s Premier League campaign. He kept 15 clean sheets in the season, but missed out on the Golden Glove award when Burnley conceded two goals in the last game of the season, in a 1–2 home loss against Brighton & Hove Albion. On 11 July 2020, Burnley drew 1–1 away against Liverpool and became the only team to take points off Liverpool at Anfield the entire season. Pope was highly applauded for his performance in the match, as he made eight saves to deny Liverpool a win.

Pope was called up to the England national team for the first time on 15 March 2018. He was named in the 23-man England squad for the 2018 FIFA World Cup. Pope made his debut on 7 June 2018 as a 65th-minute substitute as England beat Costa Rica 2–0 in a pre-tournament friendly. Pope made his first competitive international appearance in a 4–0 win against Kosovo for the final game in UEFA Euro 2020 qualifying on 17 November 2019.