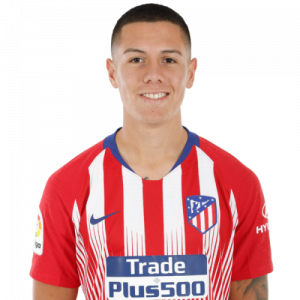 Patricio Nehuén Pérez (born 24 June 2000) is an Argentine professional footballer who plays as a centre-back for Granada, on loan from Atlético Madrid.

Pérez joined Argentinos Juniors’ system in 2007, after spells with La Quinta de Los Pibes and Unión de Tesei. He first appeared in the club’s first-team squad under manager Alfredo Berti during the 2017–18 Argentine Primera División season which culminated with the defender making his debut in a Copa Argentina tie with Independiente de Chivilcoy on 9 May 2018. In July, Pérez was signed by La Liga’s Atlético Madrid. He was immediately loaned back to Argentinos Juniors.Pérez was an unused substitute ten times in 2018–19, prior to making his league debut during a 2–1 defeat to Tigre on 12 November.

On 10 July 2019, Pérez joined newly promoted Primeira Liga side Famalicão on a season-long loan. His opening appearance for them came in the Taça da Liga versus Covilhã on 3 August. He scored his first senior goal on 31 August, netting in a league victory away from home against Aves. He was named as the league’s best defender for August. In total, Pérez appeared twenty-five times during his time with Famalicão as they placed sixth. He returned to his parent club ahead of the 2020–21 season, subsequently going unused on the bench for all three of Atlético’s opening La Liga fixtures.

On 5 October 2020, Pérez was loaned to fellow La Liga side Granada. He made his debut on 25 October away to Getafe, which preceded his first UEFA Europa League appearances arriving on 5 November in Cyprus against Omonia.