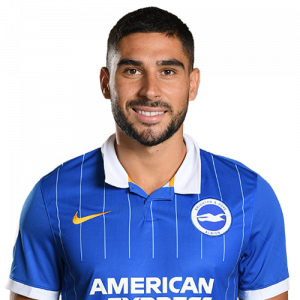 Neal Maupay (born 14 August 1996) is a French professional footballer who plays as a forward for Premier League club Brighton & Hove Albion. He came to prominence in his homeland with Nice, Saint-Étienne and Brest and was a France youth international. Maupay is also adept as an attacking midfielder or winger.

Brighton & Hove Albion
2019–20: First season at The Albion
On 5 August 2019, Maupay moved to Premier League club Brighton & Hove Albion on undisclosed terms, for a fee reported to be in the region of £20 million on a four-year deal. Maupay scored on his debut in the opening match of the 2019–20 season, scoring the third for The Seagulls in a 3–0 away win over Watford. On 14 September, Maupay opened the scoreline in a eventual 1–1 draw against Burnley, claiming his first home goal for the Sussex club. Maupay scored his 10th goal of the season in a 1–1 away draw against Southampton on 16 July 2020, helping Brighton earn an important point towards safety.

2020–21 season
Maupay opened his scoring tally on the second game of the season scoring 2 inside the first 7 minutes in a eventual 3–0 away win over Newcastle. On 26 September, Manchester United were given a penalty after the final whistle due to VAR giving a handball on Maupay right at the end. Bruno Fernandes converted the penalty with United winning the match 3–2. Maupay also scored a penalty himself earlier on in the game in Panenka style. Maupay played in Brighton’s 1–0 away victory over defending champions Liverpool on 3 February 2021 claiming their first league win at Anfield since 1982.