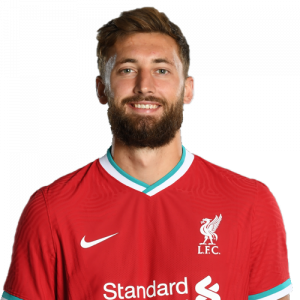 Nathaniel Harry Phillips (born 21 March 1997) is an English professional footballer who plays as a centre-back for Liverpool.

In 2016 Phillips left Bolton’s academy and trained at Huddersfield Town after he secured a scholarship at the University of North Carolina. Two days before his planned flight to the United States, he joined Liverpool’s academy instead. In the summer of 2018 Phillips started to train with Liverpool’s first team and became a member of Jürgen Klopp’s squad but still played for the reserve team. He celebrated the victory in the 2019 UEFA Champions League Final at Madrid as an unused squad member of Liverpool.

In 2019, he moved to German second-division club VfB Stuttgart on loan for the season. He made his professional debut for Stuttgart in the first round of the 2019–20 DFB-Pokal, coming on as a half-time substitute for Holger Badstuber in the away match against 3. Liga club Hansa Rostock. Phillips made his first appearance in the 2019–20 2. Bundesliga on 17 August 2019 against FC St. Pauli. On 27 December 2019, Liverpool announced that Phillips would be recalled from his loan on 1 January 2020. Phillips made 11 appearances in all competitions for the German club and had to return because of a defender injury crisis at his parent club.

He made his first team debut for Liverpool on 5 January 2020 in an FA Cup third round match against Everton. On 13 January, he was again loaned to VfB Stuttgart until the end of the season. On 31 October, Phillips made his league debut for the club, starting in Liverpool’s 2–1 win over West Ham United.