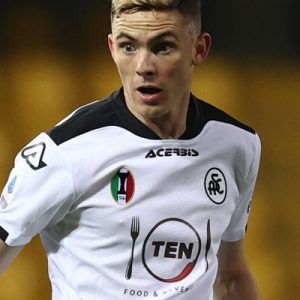 Nahuel Estévez (born 14 November 1995) is an Argentine professional footballer who plays as a midfielder for Spezia, on loan from Estudiantes.

Estévez made his professional career debut in August 2014 for Primera B Metropolitana team Comunicaciones, he played the final thirteen minutes of a 2–0 win over Sportivo Italiano. He featured eight times in his debut season of 2014, before making twenty-five appearances in 2015 which included his first senior goal when he scored the winner in an away game with Deportivo Armenio. In his fourth and final season with Comunicaciones, 2016–17, Estévez scored seven goals in 35 matches as the club lost the promotion play-off final to Deportivo Riestra. In total, Estévez scored nine goals in eighty-eight games for the club.

On 4 September 2017, Estévez joined Argentine Primera División side Estudiantes. Months later, he was loaned out to Sarmiento of Primera B Nacional. His 100th career appearance arrived in March 2018 versus Aldosivi. Estévez returned to Estudiantes ahead of the 2018–19 season, subsequently making his club debut in a loss away to Belgrano on 24 August. Three goals and 39 appearances later, on 21 September 2020, Estévez was loaned to Italian football with newly-promoted Serie A team Spezia. He made his debut on 25 October in a draw with Parma, having replaced Tommaso Pobega early in the second half.