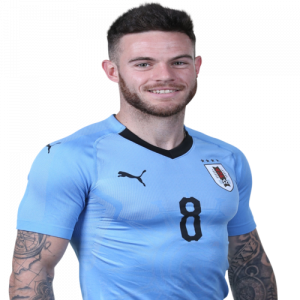 Nahitan Michel Nández Acosta (born 28 December 1995) is a Uruguayan professional footballer who plays as a midfielder for Serie A club Cagliari and the Uruguay national team.

After starting his career at Peñarol, he later played in Argentina for Boca Juniors and in Italy for Cagliari. A full international for Uruguay since 2015, he played at the 2018 FIFA World Cup and 2019 Copa América.

Born in Punta del Este, Nández is a youth exponent from Peñarol. On 1 March 2014, he made his first team debut in a Uruguayan Primera División game against Danubio, replacing Antonio Pacheco D’Agosti after 57 minutes in a 0–2 away win.

On 23 August 2017, Nández moved to Argentina’s Boca Juniors on a four-year deal, with the club paying US$4 million for 60% of his economic rights.

He made his last appearance for Boca Juniors on 31 July 2019 against Club Athletico Paranaense in a 2–0 home win. He was substituted by Eduardo Salvio in the 75th minute.

On 9 August 2019, Nández joined Italian club Cagliari Calcio on a five-year deal, for a fee of US$20 million.