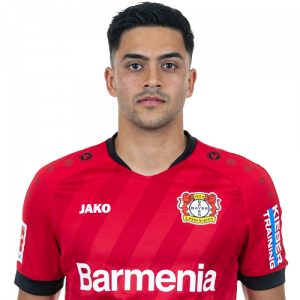 Nadiem Amiri (born 27 October 1996) is a German professional footballer who plays as an attacking midfielder for Bundesliga club Bayer Leverkusen.

1899 Hoffenheim
Amiri joined 1899 Hoffenheim in 2012 from Waldhof Mannheim. He made his Bundesliga debut on 7 February 2015 against VfL Wolfsburg in a 3–0 away defeat. Amiri recorded his first goal of the season and for his club in a 3–3 draw to Borussia Mönchengladbach on 28 November. On 30 April 2016, he scored the winning goal in the 84th minute to defeat FC Ingolstadt 04 with a 2–1 victory. On 12 June 2017, he signed a contract extension which lasts until 2020. On 20 October, Amiri scored a goal in a 3–1 UEFA Europa League victory over İstanbul Başakşehir F.K. and sealed their club’s first ever victory in Europe.