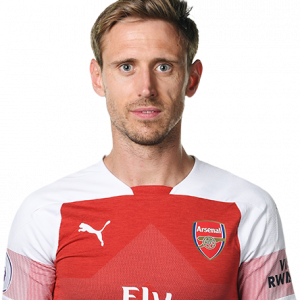 Ignacio “Nacho” Monreal Eraso (born 26 February 1986) is a Spanish professional footballer who plays as a left-back or centre-back for La Liga club Real Sociedad and the Spain national team.

He started playing with Osasuna in 2005, going on to appear in 144 official games over the course of five La Liga seasons. In 2011 he signed with Málaga and, two years later, joined Arsenal, winning three FA Cup trophies with the latter club while taking part in 251 matches across all competitions.

A full international since 2009, Monreal represented Spain at the 2013 Confederations Cup and the 2018 World Cup.

Real Sociedad
Monreal returned to Spain on 31 August 2019, with the 33-year-old joining Real Sociedad on a two-year contract. He scored on his competitive debut two weeks later, converting an easy tap-in at the hour mark of an eventual 2–0 victory over Atlético Madrid at Anoeta Stadium.