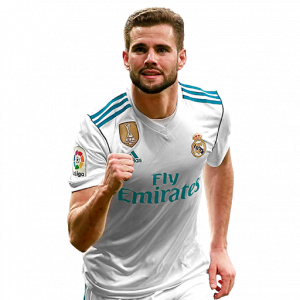 José Ignacio Fernández Iglesias (born 18 January 1990), known as Nacho, is a Spanish professional footballer who plays as a defender for Real Madrid and the Spain national team.

He has spent his entire career with Real Madrid after making his debut with the first team in 2011, making over 200 appearances and winning several trophies, including four Champions Leagues.

Born in Madrid, Nacho arrived in Real Madrid’s youth system at the age of 11. He made his senior debut in 2008–09, playing two games with the reserves in Segunda División B and subsequently appearing in a further two full seasons in that level; it was during this time he formed a long-lasting friendship with future Russian national team player Denis Cheryshev.

On 23 April 2011, Nacho made his first-team – and La Liga – debut, starting as a left back in a 6–3 away win against Valencia CF and playing in the entire match. His second appearance came the following week, in a 2–3 home loss to Real Zaragoza.

Nacho was one of the youth team players chosen to accompany the first team on their summer friendlies in North America, prior to the start of the 2011–12 campaign. He came on as a substitute in all three matches, against the LA Galaxy, C.D. Guadalajara and Philadelphia Union.

On 2 September 2012, main squad manager José Mourinho announced that Nacho, along with Álvaro Morata and Jesús, would be promoted to the first team but continue to play with Castilla. He became an official full-time member at the start of 2013–14, receiving the number 18 shirt after the departure of Raúl Albiol.

On 3 July 2014, Nacho signed a new contract with Real Madrid until 2021. He scored his first official goal for them on 10 January of the following year, closing the score in a 3–0 home victory against RCD Espanyol.

Two minutes after replacing the injured Marcelo in a UEFA Champions League group stage match against Paris Saint-Germain F.C. on 3 November 2015, Nacho scored the only goal and sealed his team’s advance to the last-16 with his first goal in a European competition. He contributed with five appearances, as the tournament ended in conquest.

On 11 February 2017, Nacho made his 100th appearance for Real Madrid in a 3–1 away win against CA Osasuna. Benefitting from injuries and suspensions to teammates, he was the most utilized player in the centre-back position as the club won its first national championship in five years; he added four matches in the Champions League, again conquered by his team.

Nacho scored his first career brace on 21 January 2018, in a 7–1 win over Deportivo de La Coruña. During that year’s Champions League he made eight appearances while scoring one goal, when Madrid won their third consecutive and 13th overall title in the tournament; in the decisive match against Liverpool, he featured at right-back after replacing the injured Dani Carvajal late into the first half of an eventual 3–1 win in Kyiv.

The 2019–20 season for Nacho was dominated by injuries, and he only made six appearances during the league season as Real Madrid won the 2019–20 La Liga.