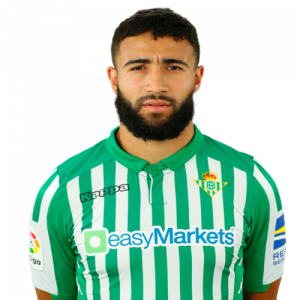 Nabil Fekir (born 18 July 1993) is a French professional footballer who plays as a forward for La Liga club Real Betis and the France national team.

An academy graduate of Lyon, he was promoted to the senior squad in July 2013. Fekir became a first-team regular in his second season, when he was named the Ligue 1 Young Player of the Year. He made 192 appearances for Les Gones, scoring 69 goals and also gaining team captaincy in 2017.

Fekir made his debut for France in March 2015 and was chosen in their squad that won the 2018 FIFA World Cup.

Youth
Fekir joined the youth academy of Olympique Lyonnais at the age of 12, and two years later he was released for not being strong enough. He rejoined Vaulx-en-Velin and continued his youth career at Saint-Priest, where he was tracked by scouts from across France.

Lyon
Fekir was included in the Lyon first team squad for the first time on 30 July 2013, remaining as an unused substitute in 1–0 home win over Grasshopper in the Champions League third qualifying round first leg. He finally made his Lyon first team debut on 28 August 2013, replacing Yassine Benzia at half time in a 2–0 Champions League play-off round second leg away loss to Real Sociedad, which saw the club eliminated from the tournament after a 4–0 aggregate defeat.

Real Betis
On 22 July 2019, Fekir signed a four-year contract with Spanish club Real Betis for an initial fee of €19.75 million and €10 million in add-ons. Lyon will receive 20% of any future sale of the player and as part of the deal, Fekir’s younger brother Yassin also transferred between the two clubs. He made his La Liga debut for Los Verdiblancos on 18 August, playing the full 90 minutes in a 2–1 defeat against Real Valladolid, and scored his first goal a week later to open a 5–2 loss at FC Barcelona.Fekir made 33 appearances in the La Liga 2020-21 season and found the net 5 times and provided 6 assists.