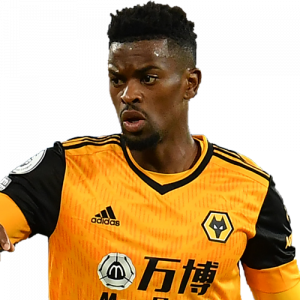 Nélson Cabral Semedo (born 16 November 1993) is a Portuguese professional footballer who plays as a right-back for Premier League club Wolverhampton Wanderers and the Portugal national team.

Semedo began his career at Sintrense before joining Benfica in 2012. After spending a season on loan at Fátima, he initially appeared for Benfica B before making his first-team debut in 2015 and going on to win back-to-back Primeira Liga titles, among other honours. In July 2017, he signed with Barcelona, winning La Liga in his first two seasons of a three-year stay. In September 2020, Semedo moved to Wolverhampton Wanderers on a three-year contract (with an option of two further years).

Semedo made his senior debut for Portugal in October 2015 and represented the nation in the 2017 FIFA Confederations Cup and 2018–19 UEFA Nations League, winning the latter tournament.

On 23 September 2020, Semedo moved to English Premier League club Wolverhampton Wanderers in a three-year contract (with an option of two further years) for an initial transfer fee of €30 million (approx. £27.5 million, with a potential further £9.2 million in add-ons) paid by Wolves. Semedo made his debut for Wolves and his first appearance in the Premier League in a 4–0 defeat away to West Ham United on 27 September 2020. He made his debut Molineux appearance for Wolves in the team’s next Premier League match, a 1–0 victory over Fulham on 4 October 2020.