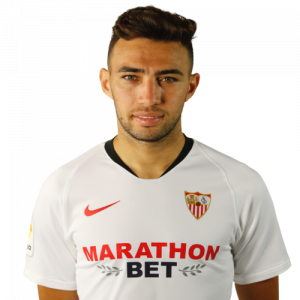 Munir El Haddadi Mohamed (born 1 September 1995), or simply Munir, is a professional footballer who plays as a forward for Sevilla and the Morocco national team.

Munir began his career in the youth ranks of Atlético Madrid before transferring to Barcelona in 2011, where he won the 2013–14 UEFA Youth League. He made his debut for the B-team in March 2014, and scored in his first match for the senior team in August of that year, at the start of a season in which they won the treble. The following year, he was one of five top scorers in the Copa del Rey, which his team won.

Born in Spain to a Moroccan father, Munir earned his first cap for the Spain national team against Macedonia on 8 September 2014. He switched his allegiance to Morocco in 2021, following FIFA’s change of rules that year.

Munir was offered the chance to renew his contract with Barcelona before its expiration in the summer, but refused to do so. Barcelona assured him that he would not play for the club again and has been favored to be sold by Coach Ernesto Valverde, saying “it would be for the best”. Several clubs from England and Italy were interested in the forward, but, in January 2019, Sevilla was able to claim him for a fee of around €1 million. The transfer was able to be completed before the transfer windows closed in January, rather than during the summer.

On 13 January, Munir made his Sevilla debut in a 2–0 loss at Athletic Bilbao, replacing Roque Mesa for the final 12 minutes. He scored his first goals in March, one in each leg of a Europa League last-16 tie against SK Slavia Prague, who nonetheless won 6–5 on aggregate, and finished the league season with five goals in 16 games including in a 2–0 win against Athletic on the final day to qualify for the continental tournament again.

Munir scored a hat-trick on 7 November 2019 in a 5–2 Europa League group win at F91 Dudelange, which put his team through to the last 32 and bought his tally in the competition to five.

On 24 November 2020, Munir scored his first Champions League goal in a 2–1 away win over Krasnodar in the 2020–21 season, that goal came in the stoppage time to grant his team a place in the knockout stages.