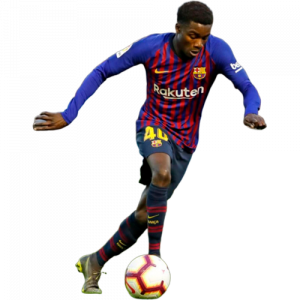 Moussa Wagué (born 4 October 1998) is a Senegalese professional footballer who plays as a right-back for Spanish club Barcelona and the Senegal national team.

Barcelona
In August 2018, Wagué completed a transfer from Eupen to FC Barcelona, for a fee of €5 million. He initially joined Barcelona’s B team to begin the 2018–19 Season. On 13 January 2019, Wagué scored his first goal for Barcelona B in a 2–0 win at the Miniestadi against CD Alcoyano.

Barcelona manager Ernesto Valverde named Wagué as one of the five promising young players to whom he hoped to give first team opportunities. Wagué made his senior side debut on 6 March 2019, starting and playing the full 90 minutes of the Catalan Super Cup against Girona. On 13 April 2019, he made his official debut in a La Liga match against Huesca where he played a full 90 minutes; he described it as a “dream come true”. Wagué again featured for the first team on 4 May 2019, impressing despite Barcelona’s 0–2 defeat to Celta Vigo. He would appear once more in Barcelona’s La Liga finale, coming on as a second half substitute in a 2–2 draw with Eibar.

Wagué was officially promoted to the first team ahead of the 2019–20 season, and given the number 16 shirt. He made his first Champions League start for Barcelona on 10 December 2019 as his side defeated Inter Milan 2–1.