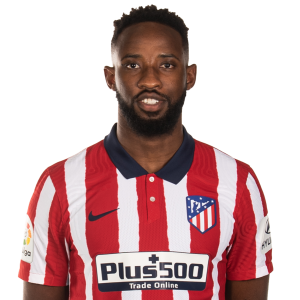 Moussa Dembélé (born 12 July 1996) is a French professional footballer who plays as a striker for Spanish club Atlético Madrid, on loan from French club Lyon.

Developed at Paris Saint-Germain, Dembélé made his professional debut for Fulham in the Premier League in November 2013. He scored 19 goals in 64 matches for Fulham before joining Celtic in 2016. Dembélé helped Celtic win consecutive Scottish domestic trebles, before moving to Lyon in August 2018.

Dembélé has earned over fifty caps for France at youth level, and in October 2016, was called-up to the under-21 team.

Lyon
On 31 August 2018, Dembélé signed for Ligue 1 club Olympique Lyonnais on a five-year contract. The transfer fee was reported as €22 million (£19.7 million), payable to Celtic over 5 years. He made his competitive debut for the club on 15 September in the 2–2 Ligue 1 draw at Caen, playing the full 90 minutes. On 26 September, Dembélé scored his first competitive goals for the club when he scored two first-half goals in the 3–0 Ligue 1 away win over Dijon. On 3 February 2019, he headed in the equaliser and later won the penalty which Nabil Fekir converted in the 2–1 Ligue 1 home win over Paris Saint-Germain and handed the leaders their first 2018–19 Ligue 1 defeat.

On 15 August 2020, Dembélé came on as a substitute on the 75th minute, scoring two goals against Manchester City in the 2019–20 UEFA Champions League quarter-finals which Lyon won 3–1 and progressed to the semi-finals.

Loan to Atlético Madrid
On 13 January 2021, Dembélé moved from Lyon to Atlético Madrid, on a ‘loan with option to buy’ deal until the end of the season. According to Marca, the transfer fee for the loan reportedly amounted to €1.5M and Atlético reserved a purchase option for €33.5M, plus a variable additional amount depending on the player fulfilling certain goals.