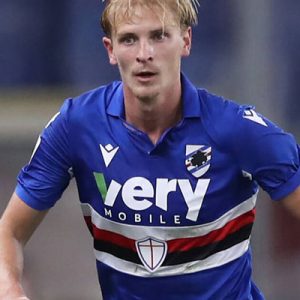 Morten Thorsby (born 5 May 1996) is a Norwegian professional footballer who plays for Serie A side Sampdoria as a midfielder.

Thorsby started his youth career in IL Heming but joined FK Lyn in 2009. While playing in Lyn he was drafted into the boys-15 national team. In 2012, he joined the youth ranks of Stabæk.

He made his first team debut in the 2013 1. Divisjon, as a substitute in four matches. Stabæk was promoted, and he made his first-tier debut in April 2014 against Molde.

On 2 June 2014, Thorsby signed a five-year contract with Eredivisie side SC Heerenveen.

On 11 January 2019, Thorsby signed a four-year pre-contract with Serie A side Sampdoria. The contract will run through the 2023 season. He joined the club on 1 July 2019.