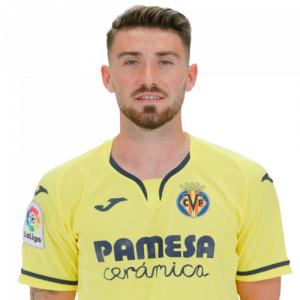 Moisés ‘Moi’ Gómez Bordonado (born 23 June 1994) is a Spanish professional footballer who plays for Villarreal as an attacking midfielder.

Born in Rojales, Alicante, Valencian Community, Gómez began his career with local Alicante CF, finishing his youth career with neighbours Villarreal CF. On 30 April 2011, not yet aged 17, he made his senior debut for the club’s B team, against Gimnàstic de Tarragona in Segunda División.

On 28 November 2011, Gómez played his first official game with the main squad – also his La Liga debut – coming on as a substitute for Jonathan de Guzmán in a 1–2 away defeat to Málaga CF. On 25 February of the following year he scored his first goal as a professional, helping to a 2–0 win at CD Guadalajara; both Villarreal teams, however, were relegated at the end of the season – the B’s finished in 12th position, but were forced to drop down a level nonetheless.

Gómez contributed 24 matches and one goal in the 2012–13 campaign, as the Yellow Submarine was immediately promoted. He signed a new five-year deal in August 2013, and scored his first goal in the top tier on 13 January of the following year, starting in a 5–1 home victory over Real Sociedad.

On 9 July 2015, Gómez was loaned to fellow league team Getafe CF in a season-long deal. On 5 July of the following year, after suffering relegation, he agreed to a permanent four-year contract with Sporting de Gijón also of the top flight.

On 26 January 2018, Gómez was loaned to second division leaders SD Huesca. After achieving promotion, the move was extended for another season.

Gómez returned to his first club Villarreal on 18 July 2019, signing a four-year contract for a rumoured fee of €1.3 million. His debut came a month later, when he started and scored once in a 4–4 home draw against Granada CF.