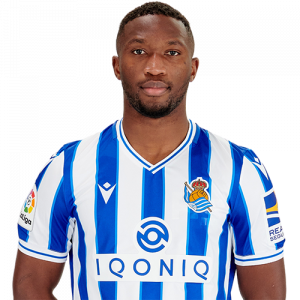 Modibo Sagnan (born 14 April 1999) is a French professional footballer who plays as a centre back for Spanish club Real Sociedad.

Lens
A youth product of RC Lens, Sagnan signed his first professional contract with them on 28 July 2017, tying him down to the club for three years. Sagnan made his professional debut for Lens in a 1–0 Ligue 2 loss to FC Sochaux-Montbéliard on 30 January 2018.

Real Sociedad
On 30 January 2019, Sagnan joined La Liga side Real Sociedad for an estimated fee of €5 million, and was immediately loaned back to Lens for the remainder of the season. The following 31 January, after failing to make a first team appearance, he was loaned to Segunda División side CD Mirandés until June.