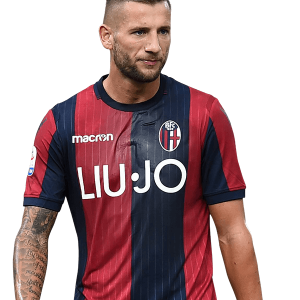 Mitchell Clement Dijks (born 9 February 1993) is a Dutch professional footballer who plays as a left back for Bologna in Serie A.

On 29 April 2018, it was announced that Dijks had signed a contract with Serie A team Bologna on a free transfer. He scored his first goal for the club on 12 August 2018 in a Coppa Italia match against Padova. He made his Serie A debut the following week in the home match against SPAL, and scored his first goal for the team on 8 April 2019, marking the final score in a 3–0 win over Chievo.

In the following season, after only five appearances, Dijks suffered an injury to the second toe of his right foot that would keep him sidelined for 5–6 months.

Dijks received his first call up to the senior Netherlands team in March 2016 for friendlies against France and England.