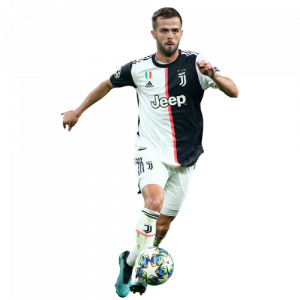 Miralem Pjanić is a footballer who plays as a midfielder for Spanish club Barcelona and the Bosnia and Herzegovina national team.

Pjanić started his professional career at Metz being there for one season. He signed for side Lyon in 2008 before signing for Roma in 2011 after three seasons at Lyon. During his time in Rome, Pjanić came to be recognized as one of the best midfielders in Serie A. In 2016, Pjanić joined Juventus, and has since been considered an integral player for the team, winning four Serie A titles, two Coppa Italias, and being named in the Serie A Team of the Year for 2015–16, 2016–17, 2017–18 and 2018–19 seasons. He was also named in the 2016–17 UEFA Champions League Squad of the Season, for his role in Juventus’s run to the final. Pjanić joined Barcelona in September 2020.

A former Luxembourgish youth international, Pjanić made his senior international debut for Bosnia and Herzegovina in 2008, earning one hundred caps and scoring sixteen goals since. He represented the nation at their first major tournament, the 2014 FIFA World Cup.

Barcelona
On 29 June 2020, Juventus announced that they had reached an agreement with Barcelona for the transfer of Pjanić on a deal worth €60 million, plus a maximum of €5 million in bonuses, to be effective following the conclusion of the 2019–20 season. The deal was also coordinated with a swap of Arthur Melo, whom Juve signed for €72 million, plus a maximum of €10 million in bonuses. Pjanić signed a contract with the Spanish side for the next four seasons, until the end of the 2023–24 campaign, with a buy-out clause of €400 million. He made his debut on 27 September, coming on as a substitute in a 4–0 home win over Villareal in La Liga.