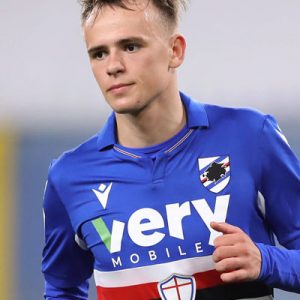 Mikkel Krogh Damsgaard (born 3 July 2000) is a Danish professional footballer who plays as a winger for Italian Serie A club Sampdoria and the Denmark national team.

Early career
Damsgaard started playing football in his hometown Jyllinge, where played for eight years, with his father as his coach. During a game with Jyllinge FC, Damsgaard was spotted by a scout from Nordsjælland, who was out actually looking for another player, but ended up contacting Damsgaard. He then joined FC Nordsjælland as a U12 player on a youth contract until 2020.

Nordsjælland
On 27 September 2017, Damsgaard made his official debut for Nordsjælland at the age of 17. He played the whole game against Vejgaard BK in a Danish Cup game, making one assist in a 4–0 win at Soffy Road.

He made his Danish Superliga debut for Nordsjælland on 26 November 2017 in a game against AC Horsens in shirt number 27.

Sampdoria
On 6 February 2020, it was confirmed that Damsgaard had signed a four-year contract with Italian Serie A club Sampdoria with effect from 1 July 2020. The transfer fee was estimated at about €6.7 million (DKK 50 million). On 17 October 2020 he scored his first Serie A goal in a 3–0 victory against Lazio.