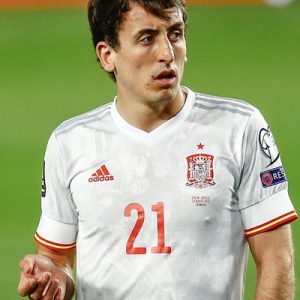 Mikel Oyarzabal Ugarte (born 21 April 1997) is a Spanish professional footballer who plays as a left winger or forward for La Liga club Real Sociedad and the Spain national team.

He has spent his entire professional career with Real Sociedad, making over 200 appearances and scoring over 60 goals. He won the 2020 Copa del Rey with the club, scoring in the final.

Oyarzabal made his full debut for the Spanish national team in 2016, representing the side at UEFA Euro 2020.

Born in Eibar, Gipuzkoa, Oyarzabal joined Real Sociedad’s youth setup in 2011, aged 14. While still a junior, he made his senior debut with the reserves on 15 November 2014, coming on as a second-half substitute in a 3–2 away win against SD Amorebieta for the Segunda División B.

On 20 September 2015, Oyarzabal scored his first senior goals, scoring twice in a 5–0 away rout of CD Mensajero. He made his first-team and La Liga debut on 25 October, replacing Carlos Vela in the dying minutes of a 4–0 victory at Levante UD.

Oyarzabal scored his first goal for Real Sociedad on 8 February 2016 in a 5–0 away win over RCD Espanyol. Six days later, shortly after having extended his contract until 2021, he scored two goals to help defeat Granada CF 3–0 at the Anoeta Stadium. On 19 August 2016, Oyarzabal again renewed his contract until 2022. He featured in all 38 league matches over the season, as the San Sebastián-based team came sixth and returned to the UEFA Europa League after a two-year absence.

Oyarzabal made his European debut on 19 October 2017, scoring in a 6–0 thrashing of Macedonia’s FK Vardar in the Europa League group stage. His team made it to the last 32, with him scoring an own goal in a 4–3 aggregate loss to FC Red Bull Salzburg; on the domestic front he scored 12 goals,[ including two in a 5–0 win against Girona FC on 8 April 2018.

On 5 October 2018, Oyarzabal scored his first goals since May of that year, two penalties in a 3–1 away victory over Athletic Bilbao in the Basque derby. Athletic Bilbao had tried to sign him in the summer transfer window, but he had rejected their approach in favour of signing a new contract with Real Sociedad to run until 2024.

In the 2019–20 Copa del Rey, Oyarzabal scored a penalty in each leg of a 3–1 aggregate defeat of CD Mirandés as his team reached the final for the first time since 1988. On 10 July that year, he achieved his 50th goal for the club in a 3–2 home defeat against Granada, and on 3 October while still 23 he scored a penalty in his 200th match in a 3–0 win over Getafe CF.

On 3 April 2021, Oyarzabal scored the only goal of the delayed 2020 Copa del Rey Final, also through a penalty, to help Real Sociedad clinch their first in 34 years after beating Athletic Bilbao.