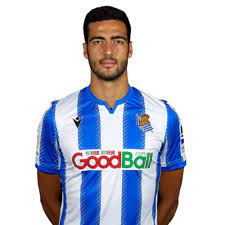 Mikel Merino Zazón (born 22 June 1996) is a Spanish professional footballer who plays as a midfielder for Real Sociedad and the Spain national team.

After starting out at Osasuna, he went on to play for Borussia Dortmund, Newcastle United and Real Sociedad.

Merino represented Spain in two European Under-21 Championships, winning the 2019 edition. He made his full debut in 2020.

Real Sociedad
Merino returned to Spain on 12 July 2018, signing a five-year deal with Real Sociedad for an undisclosed fee reported to be €12 million. His first match in La Liga took place on 18 August, when he played 59 minutes in a 2–1 win against hosts Villarreal CF; his first goal on 21 September won the game at SD Huesca.