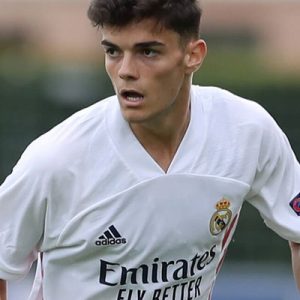 Miguel Gutiérrez Ortega (born 27 July 2001) is a Spanish professional footballer who mainly plays as a left-back for Real Madrid Castilla.

A native of Madrid, Spain, Gutiérrez was trained by Getafe CF before joining Real Madrid in 2011. In July 2017 the then Manchester United coach José Mourinho was interested in the signing of the young Spaniard, but the 16-year-old eventually decided to stay at Real Madrid.

During the summer of 2019, Gutiérrez was propelled into the first team by coach Zinedine Zidane to participate in the Audi Cup, following the injury of newcomer Ferland Mendy. He then was the first player from a Real Madrid training center born in 2001 to join the first team.