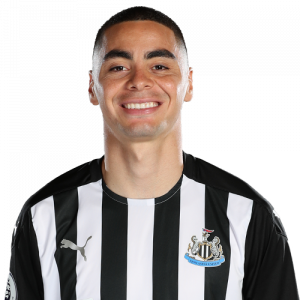 He began his career at Cerro Porteño and transferred to Lanús in 2015. After winning the 2016 Argentine Primera División, he signed for Atlanta United FC for $8 million. He was named in the MLS Best XI for both of his seasons in Major League Soccer, as well as MLS Newcomer of the Year for 2017. After helping Atlanta to the MLS Cup 2018 he signed for Newcastle for £21 million, a club record and the highest fee for an MLS player.

Almirón made his international debut for Paraguay in 2015 and represented the country at the Copa América in 2016 and 2019.

On 6 February 2021, Almirón scored twice in a 3–2 home win over Southampton, a game in which he ran 11.29 km, the most on his team. He subsequently had four goals in his last 12 Premier League games, the same as he scored in the 55 before that.