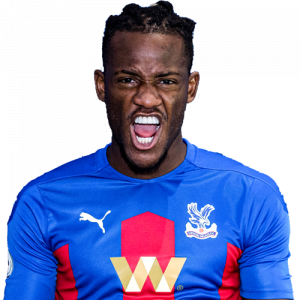 Michy Batshuayi-Atunga (born 2 October 1993) is a Belgian professional footballer who plays as a striker for Crystal Palace, on loan from fellow Premier League club Chelsea, and the Belgian national team.

He began his professional career at Standard Liège in 2011, scoring 44 goals in 120 games across all competitions. His 21 goals in the 2013–14 Belgian Pro League made him the second-highest scorer and contributed to his Ebony Shoe Award. He then transferred to Marseille for £4.5 million, helping them reach the 2016 Coupe de France Final. In July 2016, he was signed by Chelsea for £33 million, and scored the goal that won the Premier League title in his debut season.

Batshuayi scored in his international debut for Belgium against Cyprus in March 2015. He was part of their side that reached the quarter-finals of UEFA Euro 2016 and third place at the 2018 FIFA World Cup.