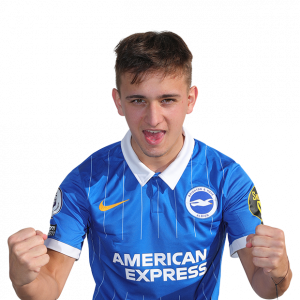 Michał Karbownik (born 13 March 2001) is a Polish professional footballer who plays as a defender for Premier League club Brighton & Hove Albion and the Poland national team.

Karbownik was born in the city of Radom, located 62 miles south of Warsaw. He began his football career at Zorza Kowala at the age of 10. In 2012, he joined a local club Młodzik 18 Radom.

In 2015, Karbownik joined Legia Warsaw. He joined the Academy, and was soon promoted to Legia’s reserve team in 2016. In 2019, he began training with the first team, and on 25 August 2019, he made his debut for Legia in a 2-3 away win against ŁKS Łódź, providing an assist for Dominik Nagy. He impressed the following game in a 3-1 win against Raków Częstochowa, where he provided an impressive assist for Jarosław Niezgoda. Karbownik quickly established himself as a key player for Legia became a regular starter. In May 2020, Karbownik extended his contract with Legia until 2024.

Karbownik was a key player in Legia’s 2019-20 Ekstraklasa triumph, and soon gained recognition. In January 2020, he was named by UEFA as one of the Best Young Players to look out for in 2020. In February 2020, he was named the ‘Discovery of the Year’ by Polish football magazine “Piłka Nożna”.He won the Ekstraklasa ‘Best Youngster of the Season’ award for the 2019-20 season, and was in the 40-man shortlist for the Golden Boy award.

On 6 October 2020 he signed for English club Brighton & Hove Albion for a transfer fee of £3 million.

Karbownik was immediately loaned back to former club Legia Warsaw until the end of the season. Under new head coach Czesław Michniewicz, Karbownik began to play in the midfield (having previously played at left-back under Aleksandar Vuković). On 2 November 2020, Legia confirmed that Karbownik tested positive for COVID-19, which omitted him from Legia’s upcoming games. He made a return to the team on 29 November, in a 2-2 draw against Piast Gliwice. However, on 8 December, Legia announced that Karbownik was ruled out of the squad for the rest of 2020 due to stress fractures in his tibia, and was recommended to rest to avoid aggravating the injury. On January 17 2021, Brighton announced they had recalled Karbownik from his loan at Legia.

Karbownik made his debut for Brighton on 10 February 2021, starting and playing the full match in the 1–0 away defeat against Leicester City in the FA Cup fifth round.