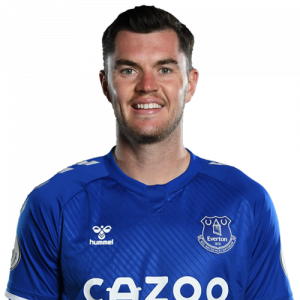 Michael Vincent Keane (born 11 January 1993) is an English professional footballer who plays as a centre-back for Premier League club Everton and the England national team.

Keane began his career at Manchester United and was named as their Reserves Player of the Year in 2012, but was loaned out several times, latterly to Burnley who signed him on a permanent basis in January 2015. He was part of their team which won the 2015–16 Football League Championship prior to his transfer to Everton in 2017.

Keane has represented the Republic of Ireland at under-17 and under-19 levels and England at under-19, under-20, under-21 and senior levels.

On 3 July 2017, Keane signed for Premier League club Everton on a five-year contract, for an initial fee of £25 million that could rise to £30 million. Keane made his league debut for Everton on 12 August 2017, when his club beat Stoke City 1–0 at Goodison Park. Keane scored his first goal for Everton on 17 August 2017 in the UEFA Europa League play-off round first leg against Hajduk Split. Keane had risen highest at the far post to head in Leighton Baines’ left-wing cross. His towering header gave Everton the lead in the 30th minute and the match ended with Everton winning the match by 2–0.

Keane scored his first league goal for Everton on 25 August 2018 in a 2–2 away draw with AFC Bournemouth before leaving the match on a stretcher and being taken to hospital after clashing heads with a teammate, having suffered from a hairline fracture to his skull.