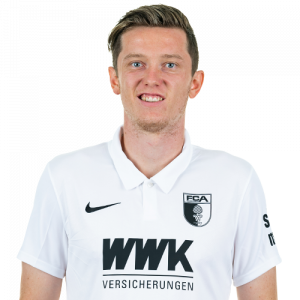 Michael Gregoritsch (born 18 April 1994) is an Austrian professional footballer who plays as a winger or striker for Bundesliga side FC Augsburg. In 2008, Gregoritsch began his career at Kapfenberger SV’s youth teams and was promoted to the Austrian Bundesliga team in January 2010. He made his debut on 14 April 2010 against Austria Wien and scored his first league goal less than three minutes after coming on as an 82nd-minute substitute. This made him the youngest goalscorer in the history of the Austrian Bundesliga with only 15 years and 361 days. He finished the 2009–10 season with a goal in four appearances. He also made appearances for the reserve team over three seasons.

Gregoritsch moved to 1899 Hoffenheim on 28 June 2011 for an undisclosed fee. He signed a four-year contract, but was loaned to Kapfenberger SV until June 2012. He then only played for the second team of Hoffenheim, where he scored 11 goals in 28 appearances.

In 2013, he was loaned to FC St. Pauli, where he played for both the first and second teams. He joined VfL Bochum on loan for the 2014–15 season, where he scored seven goals in 27 appearances.

On 23 December 2019, Gregoritsch was loaned to Schalke 04 until the end of the campaign. In his debut match for Schalke on 17 January 2020, he recorded a goal and an assist in a 2–0 home win against Borussia Mönchengladbach.