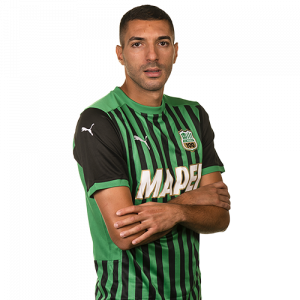 Mehdi Bourabia (born 7 August 1991) is a Moroccan professional footballer who plays as a midfielder for Sassuolo in the Serie A.

Club career
Bourabia was born in Dijon, Côte-d’Or. He started his career with Grenoble Foot 38 and made his professional debut for the club on 7 November 2009 in a Ligue 1 game against Monaco.

In June 2015, Bourabia signed a two-year contract with Cherno More Varna. On 12 August, he scored the only goal in a 1–0 victory over Ludogorets Razgrad in the Bulgarian Supercup.

International career
Bourabia was born in France and is of Moroccan descent. He debuted for the Morocco national football team in a 2–2 2019 Africa Cup of Nations qualification draw against Comoros on 16 October 2018.