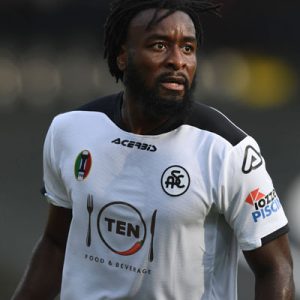 M’Bala Nzola (born 18 August 1996) is an Angolan professional footballer who plays as a striker for Italian Serie A club Spezia.

On 28 January 2015, Nzola made his professional debut with Académica de Coimbra in a 2014–15 Taça da Liga match against FC Porto, coming on as a substitute in the 4–1 away loss.

On 16 August 2018, he joined Serie C club Trapani on a season-long loan. Trapani held the obligation to purchase him from Carpi at the end of the loan term in case of Trapani’s promotion into Serie B. On 15 June he scored the first goal for the Trapani victory over Piacenza, and after that Trapani was promoted in Serie B after two years of Serie C.

On 13 January 2020, he joined Serie B club Spezia on loan with an option to purchase.

On 7 October 2020, Nzola signed with Spezia a three-year contract.