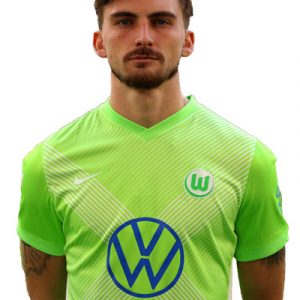 Maximilian Philipp (born 1 March 1994) is a German professional footballer who plays as a forward for VfL Wolfsburg on loan from the Russian Premier League club Dynamo Moscow.

Philipp started his career in his hometown club, Hertha BSC. In 2008, he joined Tennis Borussia Berlin.

SC Freiburg
In 2012, he signed with SC Freiburg. On 5 April 2014, he made his first-team debut at SC Freiburg, in a Bundesliga match against VfB Stuttgart replacing Felix Klaus in the 90th minute.

Borussia Dortmund
On 7 June 2017, attacking midfielder Maximilian Philipp signed a five-year contract with Borussia Dortmund until 2022. The transfer fee paid to Freiburg was reported as €20 million plus bonuses. BVB’s sporting director Michael Zorc described Philipp as “versatile” and “has a good shot and he has a fantastic future ahead of him.” Philipp made his debut for BVB on 6 August 2017 in the team’s 2–2 draw (6–7 on penalty) against Bayern Munich in DFL Super Cup, substituting for Christian Pulisic at 90′ and netting BVB’s second penalty. He started for Dortmund for the first time on 19 August 2017 in BVB’s 3–0 away victory in Wolfsburg. On 18 September 2017, Philipp scored his first goal for BVB in the team’s 5–0 home victory against 1. FC Köln. He went on to net his second goal in the same game. He made his UEFA Champions League debut on 26 September 2017 as Dortmund suffered home defeat against Real Madrid.

Dynamo Moscow
On 9 August 2019, Philipp signed a 4-year contract with the Russian club Dynamo Moscow. He scored his first goal for Dynamo 3 minutes into his debut game against FC Lokomotiv Moscow on 18 August 2019, from a direct free-kick. In his second game against FC Tambov on 24 August, he scored again as Dynamo won 2–0 away. On 23 November 2019, he scored twice from the penalty spot to secure a 2–1 victory over FC Rostov. In the next game on 1 December 2019 he scored twice again in a 2–1 defeat of FC Lokomotiv Moscow. He was voted player of the month for December 2019 by Dynamo fans.

Loan to VfL Wolfsburg
On 2 October 2020, he returned to Bundesliga, joining VfL Wolfsburg on a season-long loan.