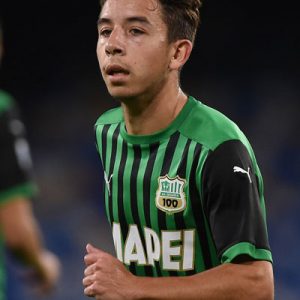 Maxime Baila Lopez (born 4 December 1997) is a French professional footballer who plays as an attacking midfielder for Serie A club Sassuolo.

Lopez is an academy graduate of Marseille, having made his professional debut in August 2016 and appeared in 150 games for the side. He signed for Sassuolo in 2021 following a loan deal at the club. He also represented France internationally at youth level.

Sassuolo
On 5 October 2020, Lopez joined Serie A club Sassuolo on a season-long loan with option to buy. The deal was made permanent in April 2021 after he had played over 30 minutes in 20 Serie A games, triggering an obligation to buy from Marseille. Lopez’s contract at Sassuolo would now keep him at the club until June 2025.

Style of play
Due to his Algerian lineage and similar progression through Marseille’s academy, Lopez has often been likened to former Marseille midfielder Samir Nasri. Though small in stature, Lopez has been described as a versatile playmaker capable of fluid movement and quick and intelligent passing.