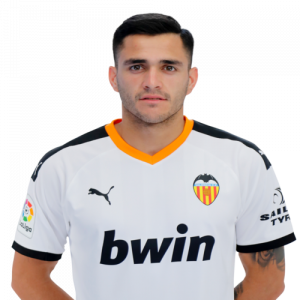 Maximiliano “Maxi” Gómez González (born 14 August 1996) is a Uruguayan professional footballer who plays as a striker for La Liga club Valencia and the Uruguay national team.

Having begun his career with Defensor Sporting, he moved to Spain in 2017, where he represented Celta and Valencia in La Liga.

A full international for Uruguay since 2017, he was selected for the 2018 FIFA World Cup and 2019 Copa América.

Valencia
On 14 July 2019, Gómez signed a contract with Valencia CF until 2024, with his release clause set at €140 million. The deal saw Valencia pay €14.5 million with Santi Mina and Jorge Sáenz moving in the opposite direction, the latter joining Celta on a two-year loan deal. He made his debut on 24 August away to his former club, playing the first hour of a 1–0 loss before being replaced by Rodrigo.

Gómez scored his first goal for the Che on 14 September, coming off the bench to net at the end of a 5–2 loss to Barcelona at the Camp Nou. Against the same opponents on 25 January 2020, he scored both goals in a 2–0 victory at Mestalla, preserving his team’s unbeaten home season and inflicting a first defeat of Quique Setién’s spell in charge of the opponents.