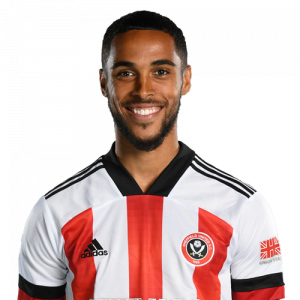 He has represented England at under-16, under-17, under-18 and under-20 level.
Lowe came through the Derby County academy, and was an unused substitute for the first team on 2 October 2013, as Derby drew 4–4 with Ipswich Town. He went on to turn professional at the club in June 2015. However, he missed much of the 2015–16 season with a hamstring injury. He made his professional debut on 23 August 2016, in a 1–1 draw with Carlisle United in the second round of the EFL Cup at Pride Park Stadium; he converted his penalty in the resulting shoot-out, which Derby won 14–13. On 27 September 2016, Lowe made his League debut in an away game to Cardiff City.
On 7 September 2020, Sheffield United announced the signing of Lowe on a four-year contract. Lowe made his debut in the EFL Cup in a 5-4 penalty loss to Burnley. His Premier League debut, against Fulham in United’s fifth league fixture of the season, lasted only 19 minutes after he had to be withdrawn following a concussion. Lowe came back into the side at left wing-back in defeats to Man City, Chelsea, West Ham and West Brom which left United stranded at the foot of the table with one point from their opening ten fixtures; Wilder admitted that Lowe was starting games “too early” and local media suggesting he looked “lost” and “could quickly find himself sinking without a trace.” Following defeat to Leicester City, in which Lowe was booked and subbed at half time, he lost his place in the team, only making two more league appearances (one start, one as substitute) between December and March.
Lowe featured in the qualifying round of the 2014 UEFA European Under-17 Championship for the England under-17s, playing in the 6–0 win over the Republic of Ireland at the Vazgen Sargsyan Republican Stadium on 29 October 2013.

In May 2019, Lowe returned to the international fold by being included in the England U20 squad for the 2019 Toulon Tournament.