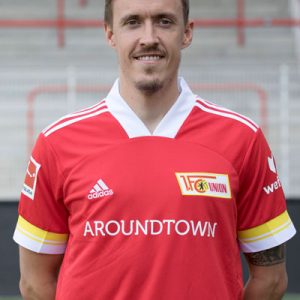 Max Bennet Kruse (born 19 March 1988) is a German professional footballer who plays as a forward for Union Berlin.

Kruse began his career with hometown club TSV Reinbek before he joined Hamburg-based SV Vier- und Marschlande in summer 1998. After more than seven years there, he was scouted by Werder Bremen in January 2006.

SC Freiburg
Following his successful spell with St. Pauli, Kruse was transferred to Bundesliga side SC Freiburg in the summer of 2012. He made his competitive debut for his new club on 18 August 2012 in a DFB-Pokal match against Victoria Hamburg, which ended in a 2–1 victory as Kruse scored the opening goal and provided the assist for Sebastian Freis’s winner.

Wolfsburg
On 10 May 2015, VfL Wolfsburg signed Kruse on a four-year deal, after activating his release clause of €12 million. He made his debut as a 70th-minute substitute on 1 August in the 2015 DFL-Supercup, and scored in the penalty shootout as Wolfsburg defeated Bayern Munich after a 1–1 draw.

Werder Bremen
On 2 August 2016, Kruse re-joined Werder Bremen for a second stint at the club. He scored his first goal for the club in his third league appearance on 3 December 2016, in a 2–1 win against Ingolstadt. On 22 April 2017, he scored four goals in one match for the first time in his career as Werder Bremen came back from 0–1 and 1–2 deficits to defeat Ingolstadt 4–2 and maintain a 10-match unbeaten run.

Fenerbahçe
On 28 June 2019, Kruse joined Fenerbahçe on a three-year deal. On 18 June 2020, he terminated his contract with the club citing unpaid wages.

Union Berlin
On 6 August 2020, Kruse returned to the Bundesliga joining Union Berlin. On 3 October, he scored his first goal for Union and the game’s opener in a 4–0 win against Mainz 05. He then scored a penalty and assisted two goals in a 3–1 win against 1899 Hoffenheim on 3 November. During a 5-0 win against Arminia Bielefeld on 7 November 2020, he scored a penalty to equalise Hans-Joachim Abel’s Bundesliga record for most penalties scored (16) without a single miss.