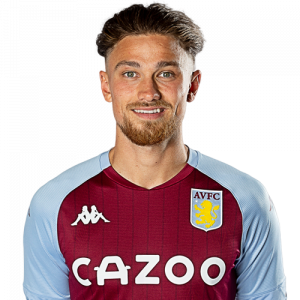 Matthew Stuart Cash (born 7 August 1997) is an English professional footballer who plays as a right back for Premier League club Aston Villa.

Cash started his career at Wycombe Wanderers and later the FAB Academy before he signed his first professional contract with Nottingham Forest and established himself as a regular at right back. He signed for Aston Villa in September 2020.

Nottingham Forest
Matty Cash signed with Nottingham Forest in October 2014, after spending 16-months with the FAB Football Academy based at Bisham Abbey, Cash had joined FAB after Wycombe Wanderers released him, due to financial problems forcing their youth teams to be disbanded, aged fourteen.[4] He experienced his first games in professional football on loan at League Two club Dagenham & Redbridge, having joined them on 4 March 2016 on a one-month loan deal. He scored his first goal for the Daggers in a 3–1 defeat to Hartlepool United on 12 March 2016.

On 5 August 2016, Cash signed a three-year deal with Forest to keep him at the club until 2019. He made his first team debut a day later, starting in a 4–3 win over Burton Albion. Cash’s early season form earned him praise, with former Forest defender Kenny Burns claiming that the midfielder’s performances were putting those of some of the more experienced Forest players “to shame”. However, on only his fifth appearance for Forest, Cash sustained a fracture to his tibia at the beginning of a 2–2 draw away to Aston Villa on 11 September 2016 which was expected to keep him out for three months.

Cash made his return from injury on 25 November as a 79th-minute substitute in a 5–2 defeat of Barnsley at Oakwell. Three days later Cash was linked with a £5,000,000 transfer to Premier League giants Chelsea, although Forest owner Fawaz Al-Hasawi subsequently took to social media to deny that the midfielder would be sold in the January transfer window. On 4 January 2017, Cash was the subject of a £6,000,000 bid from Bundesliga side RB Leipzig.Having remained at Forest upon the closure of the January transfer window, Cash signed a new contract on 3 March 2017 to extend his current deal with the club until 2021.

Having changed squad number from 41 to 14, ankle ligament damage sustained during a pre-season friendly match with Girona deprived Cash of starting the first match of the 2017–18 season, with the injury reported to sideline the player for “around three months”. He scored his first goal for Forest in a 5–2 win at QPR on 24 February 2018.

Cash scored the opening goal for Nottingham Forest in the 2019–20 season, in a 2–1 defeat against West Bromwich Albion. During the season, Forest manager Sabri Lamouchi began to utilise Cash as a right back, after injuries to Tendayi Darikwa and later Carl Jenkinson. He made the right back slot his own, with his impressive performances leading to the Poland national team reportedly motitoring his progress ahead of a potential call-up. He signed a three and a half year contract extension with Forest in November 2019.

In January 2020, a number of clubs including Milan, Everton and West Ham were interested in signing Cash. However, Cash said that he wished to stay at Forest until the end of the season in the hope that he could help the team to secure promotion to the Premier League. He cited Aston Villa’s Jack Grealish as an influence behind this decision.

Cash was named Forest’s Player of the Season by the club’s supporters on 12 August 2020.

Aston Villa
On 3 September 2020, Aston Villa announced the signing of Cash on a five-year contract for a reported £16 million. Cash made his Villa debut on 21 September 2020, in a 1–0 home victory against Sheffield United.