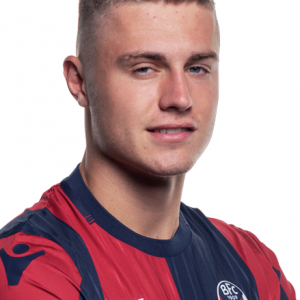 Mattias Olof Svanberg (born 5 January 1999) is a Swedish professional footballer who plays as a midfielder for Bologna and the Sweden national team.

After playing for LB07 and Malmö FF youth teams Mattias Svanberg signed an apprenticeship contract with Malmö FF on 27 July 2015. As a 16-year-old, he featured on the bench four times during the 2015 season. On 4 March 2016, he signed a four-year first team contract with Malmö. He made his Allsvenskan debut on 28 May 2016 when he came on as a substitute in the 82nd minute in a 4–1 win against Östersunds FK, and assisted on Viðar Örn Kjartansson’s goal in stoppage time. On 25 September 2016, he scored his first Allsvenskan goal in the local derby against Helsingborgs IF. He started his first game for the club on 26 October 2016, and scored a goal and an assist as Malmö FF beat Falkenbergs FF to secure the Allsvenskan title.

In 2017, Svanberg received a larger role with the team and made 21 appearances as MFF won the championship for a second consecutive year. In 2018, Svanberg became a consistent starter and was one of only two players to feature in every match during the spring before moving to Serie A club Bologna F.C. 1909 in the summer transfer window for a sum of €5 million.