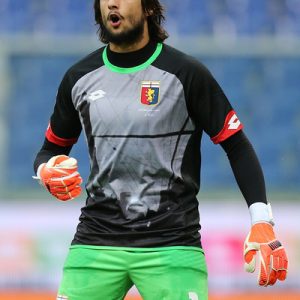 Mattia Perin (born 10 November 1992) is an Italian professional footballer who plays as a goalkeeper for Serie A club Genoa, on loan from Juventus, and the Italy national team.

He began his career with Genoa in 2010, and, aside from two season-long loan spells with Padova in 2011–12, and Pescara in 2012–13, he then remained there until the summer of 2018, during which he was sold to Juventus. He won the league title with the club during the 2018–19 season, although he primarily served as a back-up. At international level, he was an unused member of the Italy national team that took part at the 2014 FIFA World Cup, and made his senior debut later that year.

Genoa
Born in Latina and a product of the Genoa youth system, Perin was promoted to first team squad in January 2010, as a third-choice goalkeeper, and received the 88 jersey. He appeared on the bench in the matches against Grosseto (20 October 2010), Vicenza (24 November), Inter (12 January 2011) and Lazio (14 May). He made his professional and Serie A debut on 22 May 2011, playing as a starter in the 3–2 home victory against Cesena.

In the 2012 summer, he was loaned to Pescara, newly promoted in Serie A, obtaining 29 league appearances at the end of the season.

On 8 January 2017, Perin tore the anterior cruciate ligament in his right knee in a 1–0 home defeat to Roma, ruling him out for the remainder of the 2016–17 season.

Juventus
On 8 June 2018, Perin was signed by Juventus on a four-year contract for a fee of €12 million plus €3 million in bonuses; he was initially expected to compete with Wojciech Szczęsny for a starting spot, following the departure of Gianluigi Buffon. Perin made his Juventus debut on 26 September 2018, keeping a clean sheet in a 2–0 home win over Bologna. However, he only made a total of nine competitive appearances for the club throughout the season, all of which came in Serie A, as Juventus finished the season as league champions.

In July 2019, Perin was linked with a move to Portuguese side Benfica; however, he failed his medical, due to a shoulder injury, and the transfer was not completed. Due to the return of Buffon as a back-up to Szczęsny, Perin was relegated to the role of the club’s fourth goalkeeper, behind Carlo Pinsoglio; as such, in September, he was subsequently excluded from Juventus’s 22–player Champions League squad by manager Maurizio Sarri.