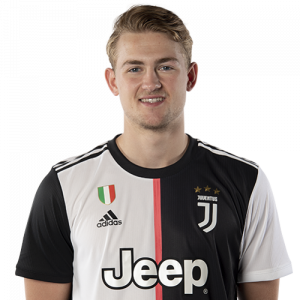 Matthijs de Ligt (born 12 August 1999) is a Dutch professional footballer who plays as a centre-back for Serie A club Juventus and the Netherlands national team.

On 21 September 2016, De Ligt made his debut for Ajax’s senior team in a cup game against Willem II. He scored from a corner after 25 minutes, making him the second-youngest goalscorer ever behind Clarence Seedorf. On 24 May, he became the youngest player ever (17 years and 285 days old) to play in a major European final when he started against Manchester United in the 2017 UEFA Europa League Final. On 17 December 2018, De Ligt won the Golden Boy award, becoming the first defender to win the award. The following season, he helped Ajax capture a domestic double and reach the semi-finals of the Champions League; his performances earned him a move to Serie A side Juventus, and saw him win the Kopa Trophy in 2019. He won the Serie A title during his first season with the Turin side.

In 2017, De Ligt made his debut for the Netherlands at the age of 17, making him the youngest player to start for the national team since 1931.

On 18 July 2019, De Ligt signed for Serie A champions Juventus on a five-year contract for a fee of €75 million, to be paid in five annual installments, with additional costs of €10.5 million. He made his official debut for the club in a 4–3 home win over Napoli in Serie A on 31 August. On 3 November, he scored his first for the club in a 1–0 away win over cross-city rivals Torino in the Derby della Mole.