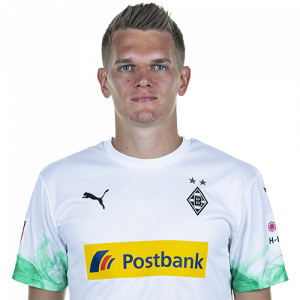 Matthias Lukas Ginter (born 19 January 1994) is a German professional footballer who plays as a centre back for Bundesliga club Borussia Mönchengladbach and the Germany national team.

Early career
Ginter began his career with SV March before he moved to the youth squad of SC Freiburg for the 2005–06 season. With the A-youth squad, he won the Junior DFB-Pokal.

In January 2012, Ginter trained with Freiburg’s first team due, in part, to a loss of several players from the roster during the winter transfer window. On 21 January 2012, Ginter made his professional debut when he was substituted in for Anton Putsila in the 70th minute against fellow relegation battlers FC Augsburg. In the 88th minute of the game, he scored the winning goal from a free-kick by Michael Lumb for his team in the 1–0 victory. The goal, which came two days after Ginter’s 18th birthday, made him SCF’s youngest Bundesliga goalscorer in the club’s history. The record was previously held by Dennis Aogo. Two days later, on 23 January, Ginter signed a contract to join the first team of SC Freiburg.

Borussia Dortmund
On 17 July 2014 Ginter signed for Borussia Dortmund on a five-year deal. He made his debut on 13 August, playing the full match as they won the DFL-Supercup 2–0 against Bayern Munich at the Westfalenstadion.

Borussia Mönchengladbach
On 4 July 2017, Ginter signed with Dortmund rivals Mönchengladbach on a four-year deal. The move was worth around €17 million.