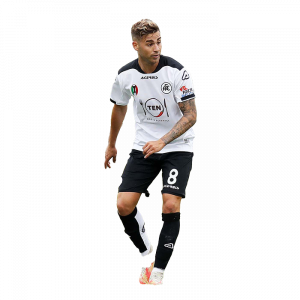 Matteo Ricci (born 27 May 1994) is an Italian professional footballer who plays as an attacking midfielder for Spezia.

Ricci grew up in the youth teams of Rome, where, with the Primavera, he won an Italian Cup and a Super Cup, reaching the call-up to the first team, but without ever having made his debut.

In January 2015 he moved to Pistoiese, where he collected 11 appearances and a goal. The following season he moved to Pisa and managed to win a place as a starter, contributing to the promotion of the Tuscan team in Serie B; plays a total of 35 games and scores two goals.

On 5 July 2016 he moved to Perugia, a Serie B militant, where he collected 24 appearances and two goals.

On July 15, 2017 he was temporarily filmed at Salernitana.

On 31 July 2018 he was bought outright by Spezia, with which he reached promotion to Serie A in 2020. On 28 September 2020 he made his debut in the top flight with the Ligurians in the 1-4 defeat against Sassuolo.