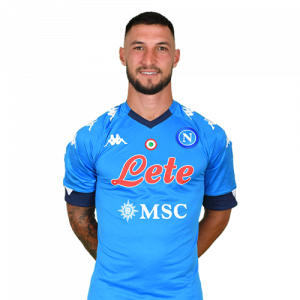 Matteo Politano (born 3 August 1993) is an Italian professional footballer who plays as a winger (on both the left and the right flanks) or as a second striker for Italian club Napoli, on loan from Inter Milan, and the Italy national team.

Roma
Of Calabrian origin from Fiumefreddo Bruzio, Politano is a youth product of A.S. Roma, with whom he won the 2010 “Allievi” U17 league, as well as the 2011 Campionato Nazionale Primavera and the 2012 Coppa Italia Primavera.

Sassuolo
On 2 July 2015, Serie A club Sassuolo signed Politano in a temporary deal with an option to purchase. In June 2016, Sassuolo exercised their option to buy Politano.

Inter Milan
On 30 June 2018, Politano signed for Inter Milan on a season-long loan deal from Sassuolo, with an option to buy in June 2019.

He made his official debut for the club on 19 August in the first match of 2018–19 Serie A against his parent club Sassuolo, which ended in a 1–0 away loss. On 15 September, Politano played his 100th Serie A match in a 1–0 shock loss to Parma at home. Two weeks later, he made his debut in the UEFA Champions League in a 2–1 comeback win over Tottenham Hotspur at San Siro in the first group stage match.