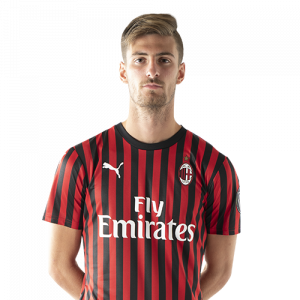 Matteo Gabbia (born 21 October 1999) is an Italian professional footballer who plays as a defender for Serie A club Milan.

A Milan’s youth academy graduate, Gabbia received his first ever call-up to the senior team by head coach Vincenzo Montella ahead of a home Serie A game against Roma played on 7 May 2017; he, however, remained an unused substitute. He made his first appearance for the club on 24 August 2017 in a Europa League qualifier against Shkëndija as a 73rd-minute substitute for Manuel Locatelli.

Loan to Lucchese
On 31 August 2018, Gabbia was loaned to Serie C club Lucchese on a season-long loan deal. On 16 September he made his Serie C debut in a 1–0 home defeat against Arezzo, he played the entire match. Eleven days later, on 27 September, he scored his first professional goal for Lucchese in the 47th minute of a 2–2 home draw against Carrarese. Gabbia ended his season-long loan to Lucchese with 30 appearances, all as a starter, he was replaced only 2 times, and he scored 1 goal.

Return to Milan
Gabbia stayed with Milan for the 2019–20 season as squad player behind Alessio Romagnoli, Mateo Musacchio, and Simon Kjær. On 15 January 2020, he played in the 3–0 victory against SPAL in the Coppa Italia, coming on as a substitute for Simon Kjær in the 82nd minute. He made his league debut on 17 February 2020 in a 1–0 home victory against Torino, again as a substitute for Kjær in the 44th minute.