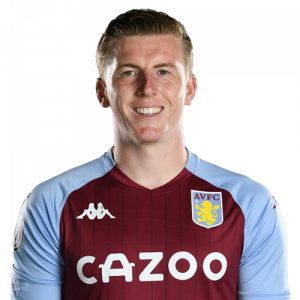 Matthew Robert Targett (born 18 September 1995) is a professional footballer who plays as a left back for Premier League club Aston Villa. He can also play as a left winger. Targett came through the Southampton academy and was named their Young Player of the Season in 2015 having broken into their Premier League squad that season, he later played on loan at Fulham, playing in their 2018 Championship Play-offs winning side. He has represented both Scotland and England at youth international level.

Born in Eastleigh, Hampshire, Targett joined Southampton’s academy at the age of eight, after being scouted by his local team. He was named in a senior matchday squad for the first time on 24 September 2013, and was unused as they defeated Bristol City 2–0 in the third round of the League Cup. On 26 April 2014, he was named in a Premier League game for the first time, remaining on the bench as Southampton won 2–0 at home against Everton.

On 26 August 2014, Targett made his first-team debut for Southampton in a League Cup second-round game at Millwall. He played the entire match, which Southampton won 2–0. His next appearance came on 23 September in a 2–1 victory at Arsenal in the following round of the tournament.

He made his first Premier League appearance on 27 September 2014, replacing Dušan Tadić in added time at the end of a 2–1 home victory over Queens Park Rangers. Targett’s first start came on 28 December, a 1–1 draw against Chelsea in which regular left-back Ryan Bertrand was ineligible through being on loan from the visiting team.

He was named as Southampton’s Young Player of the Season for 2014–15.

On 4 August 2017, Targett signed a new five-year contract with Southampton, extending his stay at the club to the summer of 2022.

On 22 January 2018, Targett joined Championship club Fulham on loan for the remainder of the season. He scored his first goal in a 1–1 draw with Bolton Wanderers on 10 February. On 26 May, he won promotion to the Premier League when Fulham beat Aston Villa 1–0 in the Championship Play-off Final, playing the full 90 minutes.

In his penultimate match for the Saints on 27 April 2019, Targett came on at half time for Oriol Romeu and scored his only goal for the club, in a 3–3 home draw with Bournemouth.

Aston Villa
On 1 July 2019, Targett signed for newly-promoted Aston Villa for an undisclosed fee. He made his debut on 27 August in a 6–1 EFL Cup second round victory over Crewe Alexandra, although he was only able to play the first 42 minutes of the game before suffering a hamstring injury.

He recovered and returned to the squad on 25 September, in a 3–1 victory in the next round at Brighton & Hove Albion,[19] and then made his first Premier League start for Villa three days later in a 2–2 home draw against Burnley.[20] Targett scored his first goal for Aston Villa on 19 October, defeating Brighton 2–1 at Villa Park in the fourth minute of added time.