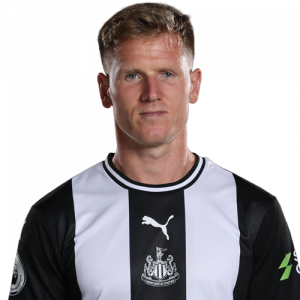 Matthew Thomas Ritchie (born 10 September 1989) is a professional footballer who plays as a winger for Premier League club Newcastle United and the Scotland national team. He previously played for Portsmouth, Swindon Town and Bournemouth. He joined Newcastle United in 2016.

Born and raised in England, Ritchie qualified to play for Scotland through his Scottish father. He made his senior international debut on 25 March 2015, in a friendly match against Northern Ireland.

On 1 July 2016, Ritchie signed a five-year contract with newly relegated Newcastle United, becoming the third signing under manager Rafael Benítez. He made his debut for the club in a 1–0 loss to Fulham, playing the full 90 minutes. His first goal, a penalty, came two matches later in a 4–1 win over Reading. From then on, Ritchie would become the club’s designated penalty taker and had a 100% success rate in all competitions, converting from the spot five times. He was involved in two penalty related incidents over the course of the season.

After being involved consistently for Scotland until the end of 2016, Ritchie withdrew from several subsequent squads due to injuries – either unable to play at all, precautions over recurrence or having to rest during international breaks to improve his condition – appearing just once in 2017 and once in 2018. In November 2018, he requested not to be considered for selection for the ‘foreseeable future’ for reasons not disclosed by Scotland manager Alex McLeish.