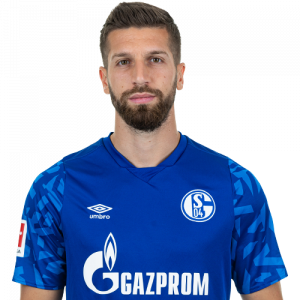 Matija Nastasić (born 28 March 1993) is a Serbian professional footballer who plays for German club Schalke 04 and the Serbia national team as a centre back.

He began his career at Partizan, and after a loan to Teleoptik joined Fiorentina in 2011. After one season there he transferred to Manchester City for €15 million and a swap with Stefan Savić, winning the Premier League in 2014, despite injury problems. In 2015, he joined Schalke, initially on loan.

Nastasić made his senior international debut for Serbia in 2012, and has gone on to earn over 25 caps.

Partizan
Matija Nastasić is a product of Partizan youth academy. Unable to find space in the Partizan first team setup, he was sent out on loan to Serbian second division side FK Teleoptik from Zemun. There, the young, left footed centre back made 21 appearances and caught the eye of Fiorentina sporting director at that time, Pantaleo Corvino, who signed him in a deal for €4 million.

Fiorentina
Nastasić spent some time in the Fiorentina youth side but, due to a lack of quality centre backs in the squad and suspensions and injuries, he trained with the first team on many occasions. Fellow Serbian and Fiorentina manager Siniša Mihajlović handed him his Serie A debut on 11 September 2011 in a 2–0 win against Bologna.

Nastasić signed a five-year contract with Manchester City, ending on 30 June 2017. He was part of an exchange deal with Stefan Savić. He made his debut for the club on 18 September 2012, starting in a Champions League away fixture against Real Madrid at the Santiago Bernabéu Stadium. He made his Premier League debut on 29 September in a 2–1 win against Fulham.

On 11 March 2015, Schalke 04 activated the transfer clause on his loan deal, believed to be €12 million, and Nastasić signed a four-year contract with the German club.

On 8 August 2015, Nastasić marked his season debut by scoring his first goal for the club, in a 5–0 win at MSV Duisburg in the first round of the DFB-Pokal.

In June 2018, along with goalkeeper Ralf Fährmann, Nastasić sign a contract extension with Schalke to stay with the club until the summer of 2022.