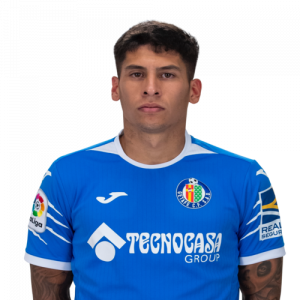 Mathías Olivera Miramontes (born 31 October 1997) is a Uruguayan footballer who plays as a left back for Spanish club Getafe CF.

Uruguay
Born in Montevideo, Olivera is a Nacional youth graduate. After progressing through the youth setup, he made his professional debut on 13 February 2016, starting and being booked in a 3–0 away win against River Plate.

Olivera appeared in only one further match for the club, a 0–2 loss at Plaza Colonia on 29 February 2016. In December of that year, he was bought outright by his agent Daniel Fonseca and assigned to Atenas de San Carlos in Segunda División.

In July 2017, Oliveira passed a medical at Galatasaray, but eventually did not sign a contract and subsequently returned to Uruguay.

Getafe
On 14 August 2017, Olivera signed a six-year deal with La Liga club Getafe. He scored his first professional goal on 21 April 2018, netting the game’s only in a 1–0 win against Eibar.

Albacete (loan)
On 4 July 2018, Segunda División side Albacete announced the signing of Olivera on a season long loan deal. He played 15 matches and scored a goal for the club before his loan was cut short by Getafe on 25 January 2019.