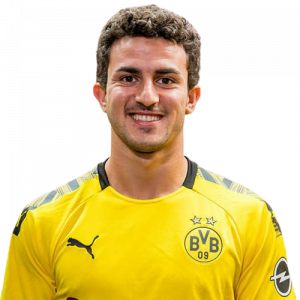 Morey was promoted to the B-team for the 2018–19 campaign, but suffered a serious knee injury in August 2018 which kept him sidelined until the following March.[5] After rejecting a contract renewal from the Catalans, he was separated from the squad, and subsequently also suffered another knee injury which kept him out for nearly two months.

Borussia Dortmund
On 1 July 2019, free agent Morey agreed to a five-year contract with Bundesliga side Borussia Dortmund. After initially playing for the reserves in the Regionalliga West, he made his professional debut on 31 May 2020, coming on as a late substitute for Achraf Hakimi in a 6–1 away routing of SC Paderborn 07.

Morey made his UEFA Champions League debut on 4 November 2020, replacing Thomas Meunier in a 3–0 away success over Club Brugge KV.