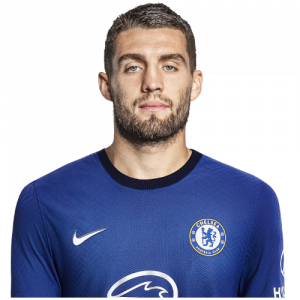 Mateo Kovačić (born 6 May 1994) is a Croatian professional footballer who plays as a midfielder for Premier League club Chelsea and the Croatia national team. Kovačić is usually deployed as a central midfielder or deep-lying playmaker, but he is considered to be a versatile midfielder, having played in different positions and adapted to playing either wide on the left or as an attacking midfielder.

Kovačić began his professional career with Dinamo Zagreb at the age of 16, with whom he won two consecutive league titles, before joining Inter Milan in 2013. After the 2014–15 season, he moved to Real Madrid, where he won the 2015–16, 2016–17 and 2017–18 Champions League. He joined Chelsea on one-year loan in 2018, winning the 2018–19 Europa League in the process and eventually signing permanently for the Premier League club. After the 2019–20 season, he was named Chelsea Player of the Year.

A full Croatian international since 2013, Kovačić represented the nation at the 2014 FIFA World Cup, UEFA Euro 2016 and the 2018 FIFA World Cup, reaching the final of the latter tournament. He was nicknamed Il Professore (The Professor) by the Italian sports journalists.