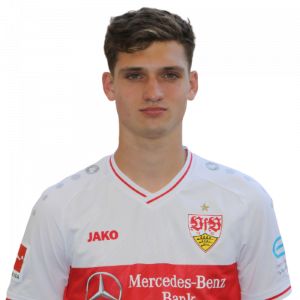 Club career
Klimowicz trained with Borussia Dortmund’s academy at a young age, while his father was playing in Germany. He later joined Instituto’s ranks. He appeared professionally twice at the back end of the 2016–17 season in Primera B Nacional, participating in fixtures with Juventud Unida, aged sixteen, and Nueva Chicago as they secured sixth. Klimowicz’s first senior goal arrived on 14 October 2017 during a 1–1 home draw with Aldosivi.

On 10 May 2019, VfB Stuttgart announced the signing of Klimowicz ahead of the 2019–20 season; with the midfielder signing a five-year contract. He made his bow as a late substitute in a 2. Bundesliga match with 1. FC Heidenheim on 4 August. They won promotion in his first season, with his Bundesliga debut subsequently arriving on 19 September 2020 against SC Freiburg. He then scored his first goal in German football on 26 September, netting in a 4–1 victory at the Opel Arena versus Mainz 05.

International career
Klimowicz is eligible to play for Argentina, Germany or – with the obtainment of citizenship – Poland at international level. He received call-ups to train with Argentina at U15, U17 and U20 level.

On 15 March 2021, Klimowicz was called up for the 2021 UEFA European Under-21 Championship group stages by Germany; he holds a German passport due to his father’s career in German football. He debuted wit the German U21s in a 3–0 win over the Hungary U21 on 25 March 2021.